US keeps eye on NKorean ship 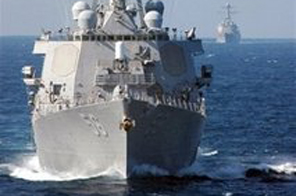 WASHINGTON: A US Navy destroyer is tracking a North Korean ship possibly carrying banned cargo as part of international efforts to enforce UN sanctions against Pyongyang, according to a US defense official.

The USS John S. McCain was shadowing the vessel, the Kang Nam, the first ship to be monitored under a UN resolution imposed a week ago that bans arms shipments to and from North Korea, the official said.

"We are keeping an eye on that ship," the official, who asked not to be named, told AFP.

Another defense official said the North Korean ship was one of a group of vessels previously linked to illicit missile-related cargo.

It was unclear what cargo the ship was carrying in this instance but, he said: "Once a suspect, always a suspect."

US officials have yet to indicate if or when they might ask to search the vessel under the UN Security Council resolution, which bans shipments of arms and nuclear or missile technology.

The North Koreans are expected to reject any such request. But at some point, the ship will likely need to stop for refueling along the Chinese coast or elsewhere, officials said.

At that point, the country where the ship enters port is obliged under the UN resolution to search the vessel if there are grounds for suspicion.

Pentagon officials declined to comment on a television report the Navy destroyer was heading to intercept the North Korean vessel.

The officials stressed that the UN sanctions do not authorize military force and that Washington was pursuing a diplomatic strategy.

Tensions on the Korean peninsula have been running high since Pyongyang carried out its second nuclear test last month.

After the underground test and subsequent missile launches, the Security Council adopted the UN resolution last week that includes financial sanctions designed to choke off revenue to the regime.

The US military meanwhile has moved to beef up missile defenses in Hawaii over fears Pyongyang may launch a rocket over the Pacific.

US Defense Secretary Robert Gates, citing concerns that North Korea might launch a missile towards Hawaii, said Thursday he had approved the deployment of THAAD missile defense weaponry to the Pacific island chain as a precaution.

US and South Korean officials have said North Korea might be readying another ballistic missile test after three launches in 1998, 2006 and this year.

The destroyer involved in the monitoring operation is named after the father and grandfather of Republican Senator John McCain, who was defeated by Barack Obama in last year's US presidential election.

#US keeps eye on NKorean ship
You May Also like: