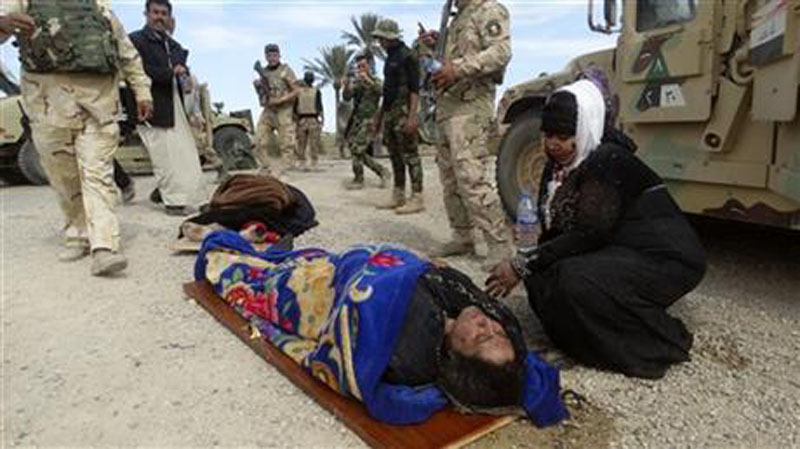 In this Wednesday, March 9, 2016 file photo, an injured woman comforts another as they wait for treatment after clashes between Iraqi Security forces and Islamic State group extremists in a village outside Ramadi, 70 miles (115 kilometers) west of Baghdad. Photo: AP
BAGHDAD:The United Nations says violence killed at least 1,119 Iraqis in March, a sharp increase from the previous month, as the Islamic State group stepped up attacks on civilians despite suffering battlefield setbacks. Another 1,561 Iraqis were wounded last month, the UN mission to Iraq said in a statement Friday. The figures include 575 civilians killed and another 1,196 wounded. The other casualties were Iraqi security forces, including Kurdish forces known as the peshmerga and government-allied militiamen. The worst-hit area was the capital, Baghdad, with 259 civilians killed and 770 wounded, followed by the northern Ninevah province, which is almost entirely controlled by IS, with 133 killed and 89 wounded. In February, there were 670 Iraqis killed and 1,290 wounded. The UN said it could not verify reports of large numbers of casualties from secondary effects of violence, including those who died after fleeing their homes from exposure to the elements or lack of food, water or health care. The UN envoy to Iraq, Jan Kubis, said he's "extremely disturbed at the continuing loss of life and injury as a result of terrorism, violence and armed conflict." "It is totally unacceptable that civilians should bear the brunt of violence," Kubis said in the statement. The IS group seized much of northern and western in Iraq in the summer of 2014 and established a self-styled Islamic caliphate in the areas of Iraq and Syria under its control, imposing a violent version of Islamic law. Iraqi forces backed by a US-led coalition have advanced against IS on a number of fronts in recent months. But the extremists have meanwhile carried out a number of large-scale bombings targeting civilians in Baghdad and elsewhere.
#United Nations #Iraq #Islamic State group #violence #Kurdish forces #Iraqis
You May Also like: