Adhikari mum on charges levelled against him 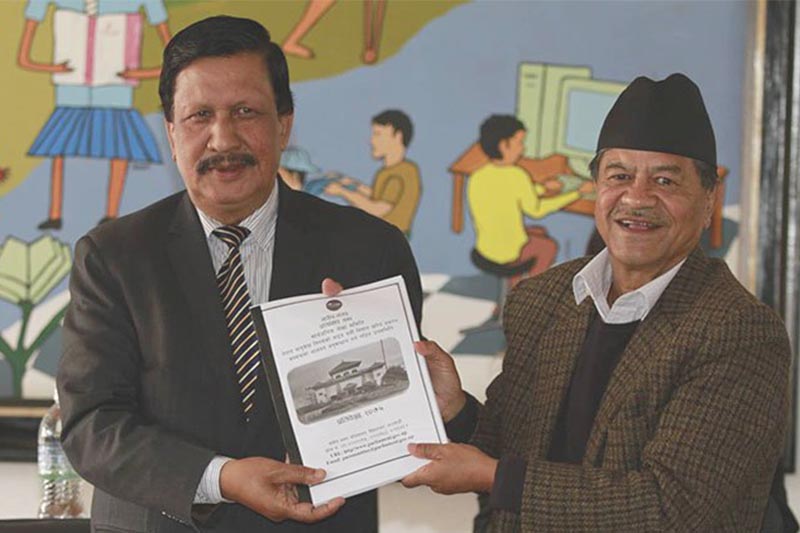 A sub-committee of the parliamentary Public Accounts Committee formed to probe irregularities in the purchase of two wide-body aircraft for the state-owned Nepal Airlines Corporation submits its report to the Committee, in Kathmandu on Wednesday, January 2, 2019. Photo: THT
Kathmandu, January 2 Mediai-friendly Tourism Minister Rabindra Adhikari, who had publicly declared he would quit politics if found guilty in the aircraft procurement scam, refused to talk to the press today after a parliamentary sub-committee confimed his involvement in financial irregularities worth Rs 4.34 billion while purchasing two wide-body airplanes for the state-owned Nepal Airlines Corporation.

A sub-committee of the parliamentary Public Accounts Committee formed to probe irregularities in the purchase of two wide-body aircraft for the state-owned Nepal Airlines Corporation submits its report to the Committee, in Kathmandu on Wednesday, January 2, 2019. Photo: THT
"I won't speak about this issue now," Adhikari told THT, referring to the report handed over to the parliamentary Public Accounts Committee by its sub-committee today. The report has recommended action against the minister for his involvement in misappropriation of funds in the aircraft purchase deal. He did not speak to other media outlets as well. The tourism minister's decision to evade media queries has posed a question mark on his previous assertion that he was not involved in the scandal. The PAC sub-committee has sought action against Adhikari for his failure to initiate proper investigation into the anomaly surrounding the purchase of two aircraft. Adhikari has released the final instalment for purchase of the sircraft, even after the Public Procurement Monitoring Office and the Office of the Auditor General said NAC had used loopholes in the Public Procurement Act and its own bylaws to acquire the airplanes. Adhikari has also been accused of lying to the parliamentary committee. During one of the hearings conducted by the PAC, he stated that he had consulted the suditor general before releasing the payment. But a day after his claim, Auditor General Tanka Mani Sharma told the parliamentary committee that the minister had not discussed the issue with him or any of his officials. The sub-committe has also implicated Adhikari's predecessors, Jitendra Narayan Dev and Jeevan Bahadur Shahi , in the case. "Like Adhikari, Dev and Shahi have also failed to take moral responsibility for releasinbg payments to purchase the aircraft. They should face action as per existing laws," reads the report. Other high-profile figures who have been implicated in the case are Tourism Secretary Krishna Prasad Devkota and his predecessors  Prem Kumari Rai, who is the home secretary, and Shankar Prasad Adhikari, who has retired from civil service. The sub-committe has also sought action against NAC Managing Director Sugat Ratna Kansakar, a number of NAC board members and members of committees formed at the time of purchasing the two aircraft . The sub-committee has identified Kansakar as the designer of the embezzlement plot. "The entire process of the procuring NAC's two wide-body aircraft was flawed. It has also violated provisions of the Public Procurement Act," said lawmaker Rajan KC, the coordinator of the sub-committee that prepared the report. He added,"A pseudo company was created and a number of agents were hired to make the purchase, although NAC could have directly reach out to Airbus to buy two aircraft. These measures were taken to embezzle money." Based on the findings of the sub-committee, a full meeting of the PAC scheduled for Friday is expected to instruct the government and the Commission for the Investigation of Abuse of Authority to take necessary action. Noine of the officials implicated by the parliamentary sub-committee was available for comments. Accusations
#NAC #Public Accounts Committee #Nepal Airlines Corporation #Rabindra Adhikari #Public Procurement Act #Tourism Minister #PAC #Public Procurement Monitoring Office #Wide-body aircraft deal #wide-body airplanes purchase #aircraft purchase deal #aircraft procurement scam
You May Also like: