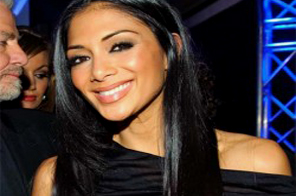 LONDON: Singer NICOLE SCHERZINGER is nursing a broken heart - she has reportedly split from her racing driver boyfriend LEWIS HAMILTON.
The Pussycat Dolls star began dating the British Formula 1 ace in 2007 and has been vocal about her desire to settle down with the sportsman.
She has previously said, “Would I get married? For sure and, yeah, the Dolls can be the bridesmaids. But I have to get engaged first. Late July is looking good. Marriage is a seal of love.”
But the comments are said to have led to 24-year-old Hamilton breaking off the relationship at the start of this month (Sep09) because he isn't ready to commit to marriage, according to Britain's Sunday Mirror newspaper.
A source tells the publication, “Lewis was adamant the relationship had come to an end. He was feeling under pressure to take their union to the next level and he wasn’t wanting to become engaged, get married or think about having children.
“He’s young, they spend an awful lot of time apart and he’s just not ready to leave his youth behind for a lifetime with Nicole. He found the tribulations of having a long-distance relationship very challenging indeed.
“Nicole’s mortified - she imagined being with Lewis for a long time and she’s shocked that things have ended so suddenly.”