Bajura/Dadeldhura, January 9 Incessant snowfall since last Thursday has hit life hard in Sudurpaschim and Karnali provinces. Life has been hit hard in Bajura, Bajhang, Darchula, and Dadeldhura of Sudurpaschim Province and Humla, Mugu, Jumla and Kalikot of Karnali Province. Regular air services from Nepalguj to Bajura, Humla, Jumla, Dolpa and Mugu have also been badly affected due to non-stop snowfall. According to Civil Aviation Authority, Nepalgunj, as many as 30 to 40 flights from Nepalgunj to Bajura, Humla, Jumla, Dolpa and Mugu have been obstructed due to snowfall for the last one week. 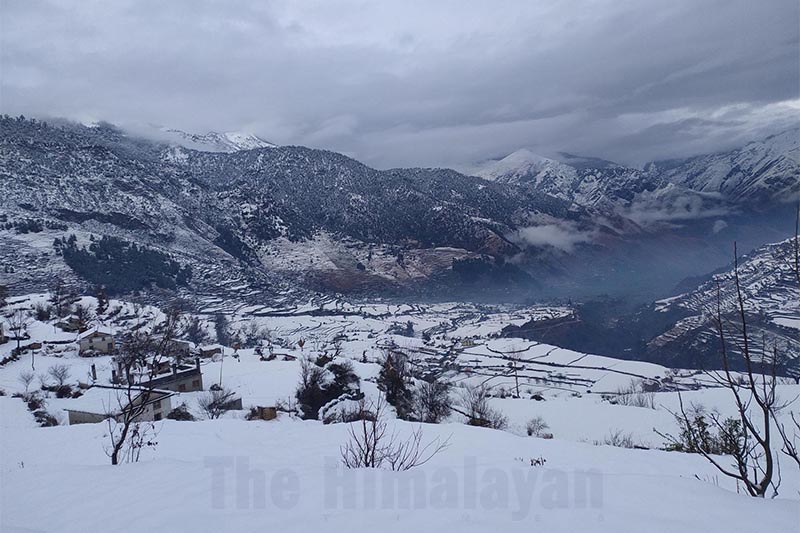 A view after snowfall at Budhinanda Municipality, in Bajura, on Thursday, January 9, 2020. Westerly winds from Bay of Bengal have affected weather across the country. Prakash Singh/THT
Vehicular movement have also been obstructed in almost all highways of Bajura. People can hardly walk on the road as snow has covered the roads in the highland areas of the district. Transportation service has been completely obstructed along the Martadi-Kolti road section for the last one week. Four local levels in the northern part of Bajura, Humla and some areas of Mugu have gone out of communication service due to the snowfall. According to Nepal Telecom, Bajura, locals have been deprived of communication service because the solar batteries were not charged. Information Officer Srijana Shahi of Jagannath Rural Municipality said official work at the local levels had also been affected with telephone and internet services affected. Similarly, life has also been badly affected due to heavy snowfalls since last night in Dadeldhura. Continuous snowfall has obstructed Bhimdatta Highway, the main highway in the district. Dadeldhura Chief District Officer Raju Prasad Poudyal said transportation service was completely stopped after Hagulte Lake in Aalital Rural Municipality received three feet high snow. According to Dadeldhura District Police Office, transport service has also been obstructed due to the heavy snowfall at Bhalumare of Amargadi Municipality, Anarkholi Bazaar of Ajayameru Rural Municipality, Sahukharka of Ganyapdhura Rural Municipality, Melakharka of Aalitaal Municipality among other places. DPO said police teams have been deployed to open the obstructed road sections.
#Karnali province #snowfall #Sudurpaschim Province
You May Also like: