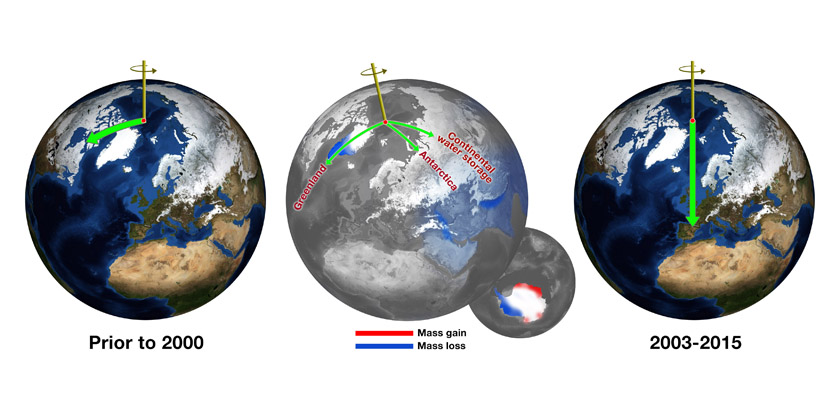 Before 2000, Earth's spin axis was drifting toward Canada (green arrow, left globe), mainly due to the mass deficit in the region following deglaciation of North American ice sheets. JPL researchers calculated the effects of changes in water mass in different regions (shown on centre globe) in pulling the direction of drift eastward and speeding the rate (right globe). Credit: NASA/JPL-Caltech

Thanks to a groundbreaking research led by a Nepali scientist at NASA. Science now has an answer to a protracted puzzle: why was Earth’s polar motion moving eastwards dramatically – from Canada to the United Kingdom – since the beginning of the new Millennium, and the mystery behind the east-west swings in the polar motion on a decadal basis.

Both melting of polar ice sheets and global land water storage pattern are responsible for the change in Earth's rotation, according to Surendra Adhikari and Erik Ivins' research. Their findings have been published in a paper "Climate-driven polar motion: 2003–2015" in journal Science Advances today.

The NASA scientists analysed space deodectic and satellite gravimetric data from 2003 to 2015 to show that all of the main features of polar motion are explained by global-scale continent-ocean mass transport, owing to the combined effect of melting of the Greenland and West Antarctic ice sheets and the changes in global continental water storage.

Earth's spin axis wobbles on a decadal pattern – meaning in some years it heads to the east and in the following years to the west, and this decadal swing continues. This has been well-documented for 115 years.

"For the first time ever, we have presented a plausible physical mechanism that explains the enigmatic decadal oscillation of the pole. It is 'decadal-scale variability in (global) land water storage pattern' that drives the 'decadal polar motion'," Adhikari said.

The newly discovered link between polar motion and global-scale terrestrial water storage variability has broad implications for the study of the past and future climate, according to the paper.

“The main point is that we have established a connection between global scale climate variability in general and delicate motion of Earth’s spin axis,”Adhikari said.

“In a way, such motion of pole is sort of barometer of climate change — just like melting of glacier or rising sea level or rising global temperature.”

The polar motion, and change in its direction for that matter, does not affect human's daily life directly. They, however, must be taken into account to get accurate results from GPS, Earth-observing satellites and observatories on the ground, according to the 33-year-old Nepali scientist.

Before 2000, Earth's spin axis was drifting toward Canada (green arrow, left globe), mainly due to the mass deficit in the region following deglaciation of North American ice sheets. JPL researchers calculated the effects of changes in water mass in different regions (shown on centre globe) in pulling the direction of drift eastward and speeding the rate (right globe). Credit: NASA/JPL-Caltech

Surendra Adhikari comes from a humble background. Born in Lamjung in July 1983, he is currently a NASA Postdoctoral Fellow at California Institute of Technology and is affiliated with Jet Propulsion Laboratory.

Adhikari went to local Saubhagya Secondary School at Chakratirtha in Lamjung. He passed SLC in 1998 and came to Kathmandu to pursue ISc at Amrit Science Campus.

After doing BE in Agricultural Engineering from Tribhuvan University's Institute of Engineering in the Dharan-based Eastern Regional Campus in 2004, he went to Belgium for further studies. He did MSc in Engineering Geology from Free University of Brussels in 2007. He completed his PhD in Geography from University of Calgary in Canada in 2012.

Adhikari is involved in research related to ice, sea level, solid earth, and space geodesy and has published many papers.

What attracted Adhikari to Earth science? "In those days in Nepal, I don't think anyone wanted to be an earth scientist per se. Engineer – that's what I wanted to be," he said.

"I love mathematics first and then physics. And Earth science covers both," he added, recalling his academic background and how he entered the field pursuing his career as a research scientist.