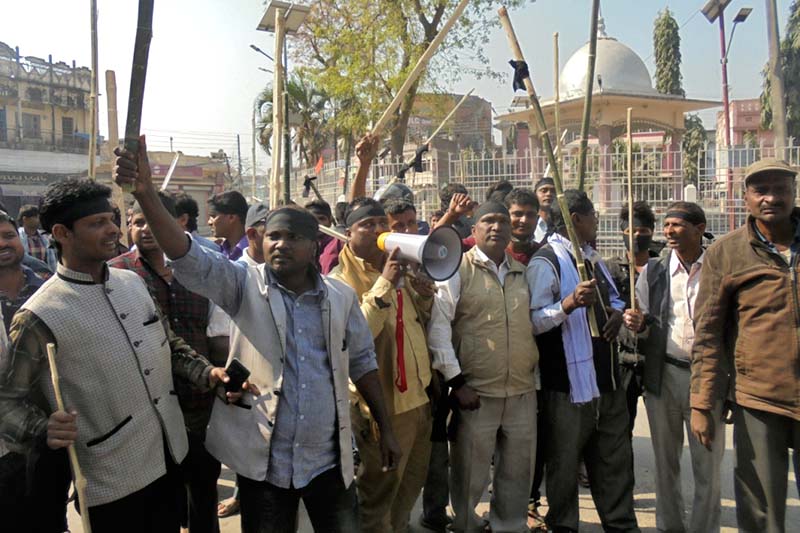 Cadres of United Democratic Madhesi Front take out a rally against CPN-UML Mechi-Mahakali Campaign in Rajbiraj of Saptari district, on Monday, March 6, 2017. Photo: Byas Shankar Upadhyaya
RAJBIRAJ/KATHMANDU: The Saptari district headquarters and adjoining areas remained tense on Monday as the United Democratic Madhesi Front cadres tried to obstruct the Mechi-Mahakali campaign of CPN-UML. They clashed with security personnel in different parts of the district. Some of them are reportedly injured. Amid chaos, the Mechi-Mahakali Rath Yatra reached Maleth VDC, outside Rajbiraj, where the main opposition party organised a mass gathering. Carrying sticks, the UDMF cadres hit streets to enforce the general strike and obstruct the vehicular movement in the district since early morning. They burned tyres on the road. Over a dozen protestors have been detained by police after they obstructed vehicular movement along the East-West Highway and other major thoroughfares. Three were held from Bhardaha and five each from Rupani and Kanchanpur, Gajendra Mandal told the Rastriya Samachar Samiti reported. Earlier today, two homemade bombs were found planted near the industrial estate in Maleth where CPN-UML's mass gathering was organised. READ ALSO:
#CPN-UML #UDMF protest #UML's Mechi-Mahakali campaign
You May Also like: