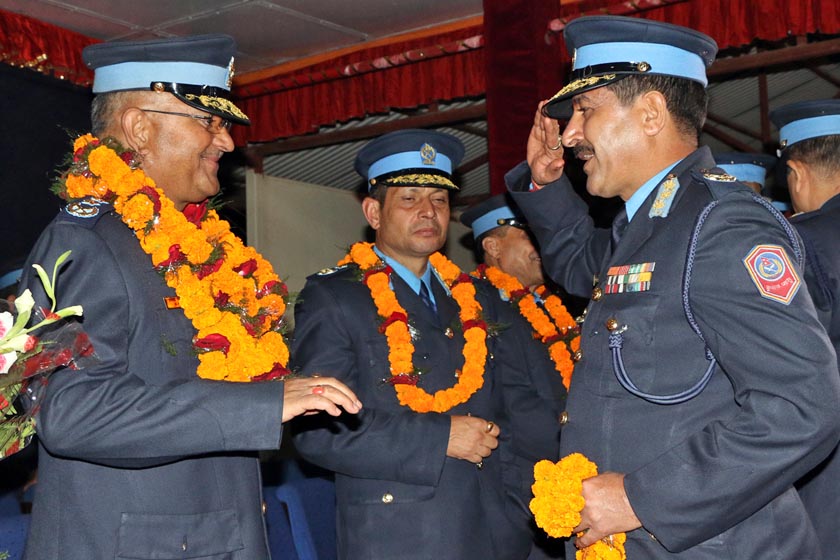 File - DIG Jaya Bahadur Chand, who was appointed IG, salutes his outgoing boss on February 13 . Photo: RSS
KATHMANDU: The Supreme Court of Nepal has revoked the Cabinet's February 12 decision to appoint Jaya Bahadur Chand the Nepal Police chief, dubbing it arbitrary, flawed, unjust and a bizarre example of pick and choose. The full bench, comprising of Chief Justice Sushila Karki and Justices Hari Krishna Karki, Ishwar Prasad Khatiwada, Ananda Mohan Bhattarai and Anil Kumar Sinha, today issued a final verdict on all three writs filed against Chand's appointment. The five-person bench observed that the government did not follow the Nepal Police Regulations and other established norms while elevating Chand to the Nepal Police's top post with a double promotion. It further issued an order directing the government to immediately appoint the most competent contender from among DIGs who have been evaluated for the past four years. The Supreme Court categorically told the government to consider seniority as well as merit as per the Rule 41 of Nepal Police Regulations, other established norms, the chain of command of Nepal Police and petitioner [Nawaraj Silwal]'s legitimate expectation while making the decision now. This has paved the way for DIG Nawaraj Silwal's elevation to the top post.

File - DIG Jaya Bahadur Chand, who was appointed IG, salutes his outgoing boss on February 13 . Photo: RSS
Advocate Kapil Dev Dhakal and DIG Silwal had moved the apex court, challenging the appointment. Silwal had argued that he was the senior-most and most competent among the contenders, and that the government decision was not at a par with the Rule 41 of Police Regulations. In response, the apex Court had stayed the appointment and barred Chand from assuming the office. Today's final verdict pointed out that the Rule 41 bases on the principle of seniority-cum-merit, and the work evaluation done as per the Rule 31 should be taken into consideration for the evaluation of five qualities --  seniority, performance, skill and ability to bear responsibility as well as lead, encourage and mobilise the juniors -- that the Rule 41 prescribes. Since the Cabinet decision neither referred to any basis, provisioned by Rule 41, nor explained the reasons for Chand's promotion, it was flawed and against the law prima facie, the order said. Referring to a document that the government submitted, the order added that among 22/23 DIGs, Nawaraj Silwal, Prakash Aryal, Jaya Bahadur Chand and Bam Bahadur Bhandari respectively were contenders for the post, and Silwal had fared best in seniority as well as work evaluation. For failing to include other officials, who were in the first, second and fourth in the seniority list, and portraying as if Chand was the only DIG in the Nepal Police, the order dubbed the February 12 decision "a bizarre example of pick and choose". "Law does not allow this sort of arbitrary selection," it observed, "This non-transparent decision has affected the right and legitimate expectation of officials senior to Jaya Bahadur Chand." The decision as well as the government's written explanation have failed to justify why Chand, who was third in seniority, was preferred to Silwal, who was in first in seniority as well as priority, for promotion, according to the order. Promotion of the Inspector General of Police is not just a matter of the government's pleasure, the order sternly said, "It is the right and legitimate expectation of the candidates." The order further pointed out the need for considering norms of good governance, rule of law, and accountable and limited government in the case. The government had to choose one among Silwal, Chand, Aryal and Bhandari, four batchmates,   to lead the Nepal Police as all the non-technical AIGs were retiring on the same day along with IG Upendra Kant Aryal due to their 30-year service on February 13. Due to the apex court's orders, the government was forced to amend the Nepal Police Regulations to appoint AIG Dr Dinesh Chandra Pokhrel, who is from technical stream, an acting chief to lead the police force. In a nine-page brief order issued today, the bench expressed its surprise over absence of 30 advocates who had registered their names to plead on behalf of one of the defendants Chand in the full hearing. Chand's advocates and Attorney General Raman Kumar Shrestha had stayed away from pleading to protest the inclusion of Hari  Krishna Karki, who had issued stay order in the case earlier, in the full bench. The full text of the verdict is yet to be prepared. While giving continuity to the stay orders issued on February 12 and 13, a division bench of Justices Hari Krishna Karki and Tej Bahadur KC on March 1 had decided to send the case to a full bench. READ ALSO:
#Supreme Court of Nepal #Nepal Police #Cabinet decision #Jaya Bahadur Chand #IGP appointment #Nepal Police Regulation #Nawaraj Silwal #Rule 41
You May Also like: