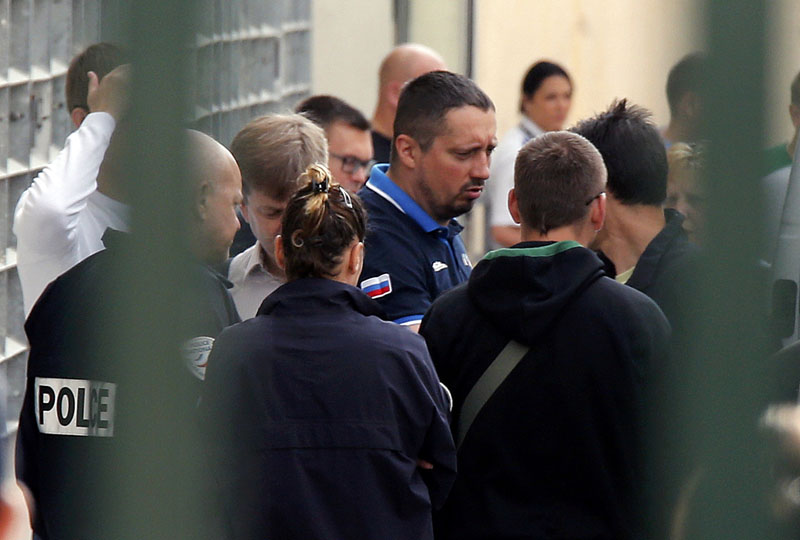 FILE PHOTO - Russian soccer fan leader Alexander Shprygin, who will again be deported from France after he returned despite a previous expulsion in connection with violence that marred the start of Euro 2016, is seen during his first expulsion in Marseille, France, June 18, 2016. Photo: Reuters/File
PARIS: France deported Russian soccer fan leader Alexander Shprygin on Wednesday for the second time in less than a week over violence that marred the start of the Euro 2016 tournament, a spokesman for France's Interior Ministry said. Police re-arrested Shprygin on Monday in the southwestern city of Toulouse, where the Russian team was playing Wales. He was deported on Saturday following violence before and during an England-Russia match in Marseille but came back to France. "Alexander Shprygin was expelled from France. The plane took off from Paris' Charles de Gaulle airport shortly after midnight for Moscow," Interior Ministry spokesman Pierre-Henry Brandet said. Anti-racism groups have accused Shprygin, a self-described nationalist who was photographed as a young man making what looked like a Nazi salute, of having links to Russia's shadowy far-right movement. He has dismissed the allegations. Fan violence marred the opening days of the tournament and forced European soccer's governing body UEFA to threaten England and Russia with expulsion from the championship. Russia was eventually eliminated from the tournament on Monday after losing to Wales. Disturbances have largely subsided in recent days, but police used tear gas, pepper spray and batons to break up fights between Polish soccer fans in the southern French city of Marseille on Tuesday, detaining at least 12 of them ahead of Poland's final Euro 2016 group stage match against Ukraine. In the northern city of Lens, which was otherwise quiet, police arrested 18 people on Tuesday for possession of smoke grenades, five of which were in the stadium, local authorities said. But in the southwestern city of Bordeaux, Irish supporters, who have endeared themselves to the French with their warm-hearted banter, serenaded officers with chants of: "Stand up for the French police."
#Russia #Euro 2016 #UEFA #England #Charles-de-Gaulle airport
You May Also like: