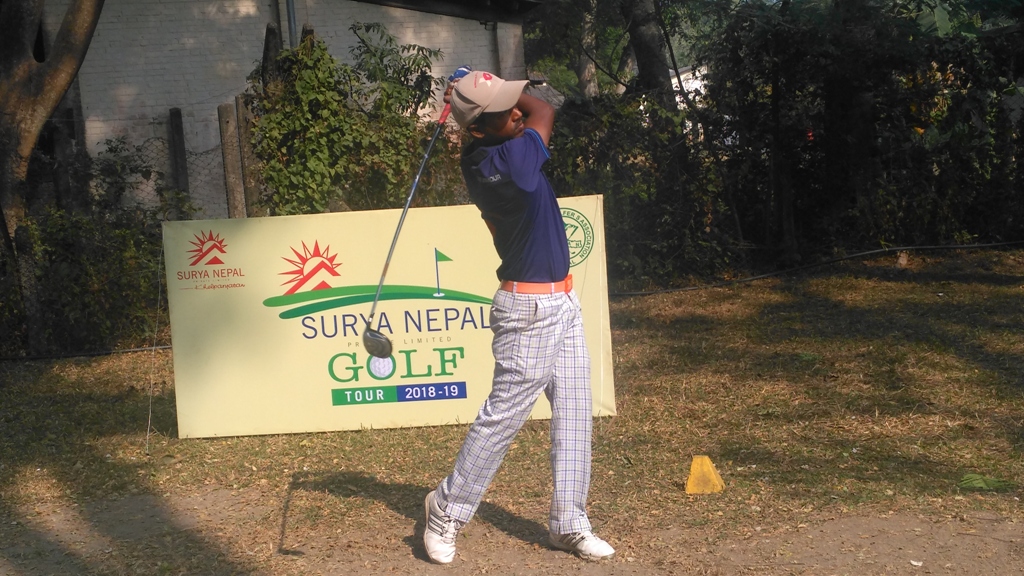 Rabi Khadka plays a shot during the second round of the Surya Nepal Eastern Open in Dharan on Thursday, December 27, 2018. Photo: THT
Dharan, December 27 Former top pro Rabi Khadka opened up one-stroke lead after the second round of the Surya Nepal Eastern Open here at the Nirvana Country Club Health and Golf Resort today. Khadka carded one-over 71 for the 36-hole total of three-under 137 and was one shot ahead of fellow RNGC pro Shivaram Shrestha, who shot two-over 72. The duo shared the first round lead at four-under 66. National team members, amateur Sukra Bahadur Rai was third at one-under 139 after he carded one-under 69 at his home club. Khadka, who had finished on top of Order of Merit in the Surya Nepal Golf Tour 2009-10 season, carded one-under 35 on the front nine before playing two-over 36 on the latter half. After facing a bogey on the fourth, Khadka carded two straight birdies on the eighth and ninth before taking the turn. Top pro and defending champion Shrestha faltered on the front nine shooting four-over 40 but he recovered on the back nine with a two-under 32 to stay in contention. He carded a birdie on the second hole but suffered a triple bogey eight on the par-5 third hole. Shrestha then dropped shots on the seventh and ninth. He bounced back on the back nine and carded three birdies on the 11th, 12th and 15th holes before facing a double bogey on the 16th hole. Shrestha completed the round with a birdie on the final hole. Amateur Rai played even-par 36 and one-under 33 on two halves respectively. He carded a birdie on the third hole before facing bogeys on the fourth, sixth and eighth holes. He recovered with an eagle on the par-4 ninth hole. After taking the turn, Rai faced a bogey on the 11th before carding birdies on the 13th and 18th holes. Sanjay Lama was fourth at one-over 141 after he shot one-over 71, while Bhuwan Nagarkoti (71), Bikash Adhikari (71) and Tham Bahadur Rai (71) shared the fifth position at two-over 142. Shiva Kumar Majhi (72) was eighth at three-over 143, whereas Dev Raj Pakhrin (69) and Dinesh Prajapati were tied for ninth at four-over 144. A total of 32 golfers, 22 pros and 10 amateurs, survived the cut which was applied at 15-over 155 in the third event under the Surya Nepal Golf Tour 2018-19. The tournament, organised by Nepal Professional Golfers Association under the sponsorship of Surya Nepal Pvt Ltd, carries a cash purse of Rs 661,500.
#Golf #Surya Nepal Eastern Open #Nirvana Country Club #Rabi Khadka
You May Also like: