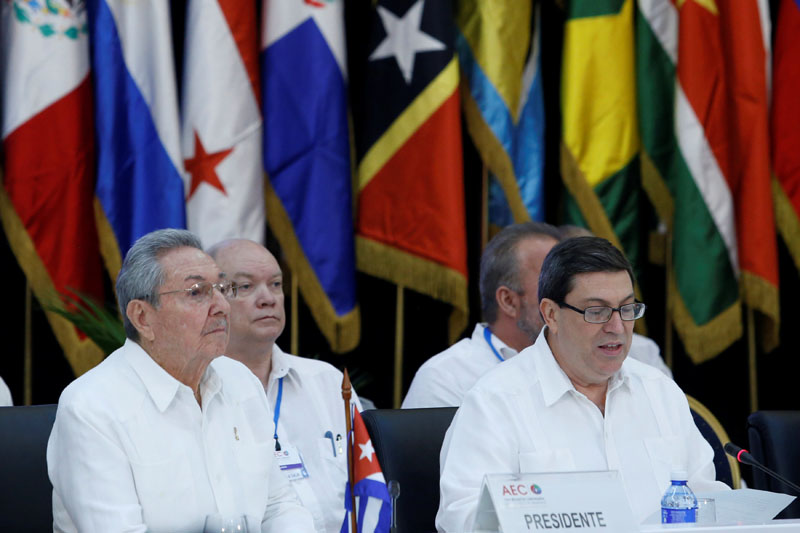 Cuba's President Raul Castro (left) listens to Cuba's Foreign Minister Bruno Rodriguez during the opening of the Association of Caribbean States meeting in Havana, Cuba, on March 10, 2017. Photo: Reuters
HAVANA:  Foreign ministers and other officials from 25 Caribbean countries met in Havana on Friday to discuss a joint response in the face of Trump administration threats to migrants and trade. Opening remarks at the closed-door event, attended by representatives from Colombia, Mexico, Cuba and other countries in Central America and the Caribbean islands, made clear the new US administration was uppermost on the agenda, though the name of President Donald Trump was never uttered. The United States is a key economic partner for the region. "We are meeting at an exceptional historic moment when there are geographic changes on the global scene and we have to be prepared," said June Soomer, who is from Saint Lucia and is secretary general of the Association of Caribbean States. "We are not going to resign ourselves to what others in the world dictate. We are not a mediocre region, we are one of excellence and peace," Sooner said. Cuban President Raul Castro attended the opening ceremony. His foreign minister, Bruno Rodriguez, lit into Trump's policies in his opening remarks, and said the organization should come up with a joint response, as the policies threaten the development models of local economies. "The excluding and repressive migration policies announced by countries of destination, ... as well as the implementation of extremely protectionist trade measures, are real challenges for our sub-region," he said. "In the face of the walls intended to be built, our choice should continue to be unity, solidarity and cooperation to defend the most legitimate interests of our peoples," he said. The meeting in Cuba comes just four days after Trump signed a revised executive order that bans the entry into the United States for 90 days for citizens of six Muslim-majority nations - Iran, Libya, Somalia, Sudan, Syria and Yemen. The order revised Trump's original travel ban issued in January, removing Iraq from the list and applying the ban only to new visa applicants. Trump has also promised to build a wall along the Mexican border and threatened to impose tariffs on Mexican-made products. Rodriguez met separately at the event with Mexican Foreign Minister Luis Videgaray. "Mexico is a sovereign nation. It is a strong nation and greatly strengthened by support from the nations of Latin America, the Caribbean and the fraternal Cuban people," Videgaray told the press, refusing further comment.
#Havana #Donald Trump #Caribbean countries #Trump administration
You May Also like: